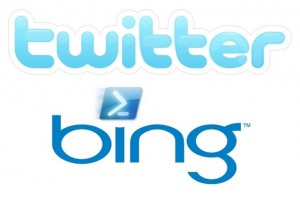 Microsoft’s Bing search engine will start indexing some Tweets in real-time. This will make Bing the first major search engine to do so. In a post on the Bing community blog, Microsoft’s Sean Suchter said the company would highlight new Tweets from a select group of people in both the “search technology and business sphere” and also from those with “more general consumer appeal.” Already, search engines like Bing and Google index Twitter posts, but the results are not constantly refreshed.

When Microsoft relaunched Live Search as Bing earlier this month, it said it was looking into ways to incorporate Tweets in the search engine’s user experience. Although it had given no indication that it was in much of a rush, saying that there were many ways to define what “real-time” results actually entailed. Since then, however, Google has given signs that it is on the verge of launching some sort of microblogging search offering that would index content from Twitter as well as other microblogging sites in real-time. Results would also be incorporated into Google’s main web results.

Microsoft emphasized that it was not indexing all of Twitter in real-time, only the Tweets of a “few thousand people” based on their follower count and tweet volume. And, indeed, the examples that Microsoft provided indicated that the Twitter results will show up independent from the main body of entries, much like the instant answers that Bing surfaces when someone searches for the weather or a sports score. Users will also have to search for someone’s name as well as “Twitter” or “Tweet” or “@” in order to see the results. That seems to take away a bit from the value of the feature, since many people search Twitter to get a sense of what’s going on at a given moment on a certain subject. But Suchter said in the post that it was just a start. “We think this is an interesting first step toward using Twitter’s public API to surface Tweets in people search,” Suchter said.