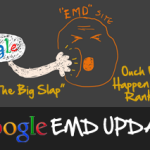 Google recently announced the EMD Update, a algorithm change that attempts to get rid of low-quality sites. EMD sites have always been much easier to reach the top of Google. I have seen many real brands have problems reaching number 1 on Google because of these types of sites. So what happens is, EMD sites become very valuable. A client recently spent almost $2,000 on an EMD domain.

If you have an EMD site and haven’t had any changes in your rankings this time, you could see some changes in the future.

How The EMD Update Works

One common misconception with this update is that these domains will no longer rank as well. I’ve not seen evidence of this so far, and it’s certainly not what Google said.

Google specifically said EMD was designed to go after poor quality sites that also have exact match domain names. If you do a search for “google,” you still find plenty of Google web sites that all have “google” in the domain name. EMD didn’t wipe them out because those sites are deemed to have quality content.

Is that Google just favoring itself? I wouldn’t say so. After all, it didn’t wipe out:

Instead, EMD is more likely hitting domains like online-computer-training-schools.com, which is a made-up example but hopefully gets the point across. It’s a generic name with lots of keywords in it but no real brand recognition.

These sites often lacked any really quality content. They were created in hopes of easy money or rankings and there’s often no real investment in building them up with decent information.

Some of them lack content at all or have content that is taken from other sites. Google already went after parked domains last December. It’s already been going after scrapers with Panda and other efforts.

It’s really important to understand that plenty of people have purchased exact match domains in hopes of getting high rankings and have also put in the time and effort to populate these sites with quality content. I’ve already listed some examples of this above, and there are smart “domainers” beyond this who build a domain with a nice name into a destination, making it more valuable for a future sale.

Google confirmed this week that EMD is a periodic filter. It isn’t constantly running and looking for bad EMD domains to filter. It’s designed to be used from time-to-time to ensure that what was filtered out before should continue to be filtered. It also works to catch new things that may have been missed before.

If you were hit by EMD, and hope to recover, the advice seems to be very similar to Panda — get rid of the poor quality content.

To complicate matters, many sites that may have thought they were hit by EMD instead might have been hit by the far bigger Panda Update 20. Google belatedly acknowledged releasing a fresh Panda update the day before EMD was launched.

My advice is that if you were never hit by Panda before — and you have a domain name you purchased in hopes of an “exact match” success — then it’s probably EMD that hit you.