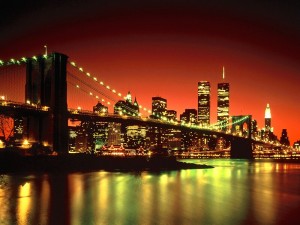 Like most New Yorkers I know, it’s a love hate relationship. I have seen many people move away and plenty come back to NY. After I go on vacation I always wonder why I live here when I return. But can I really live elsewhere?

Potholes, construction, traffic, rude people, constant rushing around, expensive real estate, gas prices, taxes, the list goes on… of course on the flip side we have some of the best restaurants, a great sports town, Broadway, the skyline, Hamptons, again, the list goes on… For me it is the family and friends that will probably keep me here. Will see what happens though.

I grew up rather poor… welfare, food stamps, utilities getting shut off, but I always remember having everything I wanted. My mom figured out a way to make it happen. I have 4 older sisters, so you can say I had 5 moms.

Both parents ended up passing away and it was tough entering my adult life. But I somehow made it through without getting into drugs, drinkings or getting into any major trouble.

In my 20’s I put all my time into my career. Summers came and went and don’t remember being outside much. I put my head down for 7 years at EZZI.net until the company was sold. Since then life has been pretty consistent, having the luxury to choose which direction my career went.

I met my wife when I was 26 and 9 years later we got married. Had our first child a year after that. Life today is pretty crazy with work and taking care of the little one. We got married in Mexico and had 60 people come celebrate with us, which ended up being the best week for all of us. Not many get to go on vacation with their closest family and friends for a week.

I am a huge sports fan, Yankees and Jets for me… my dad was a big Yankee and Giants fan, but I always went against him for some reason so it’s the Jets for me. I did ask why we weren’t Met fans in the mid 80’s, but he wouldn’t let me become a Met fan, he said I would understand one day. It is tough being a Yankee fan, when they won in 2009, it was more of a relief than a celebration. I hear it all the time when they lose, but when they win I hear… well it’s the Yankees they are supposed to win. Only some will understand where I am coming from on this. Being a fan of the Jets is like being a fan of the Mets, its just torture all around.

New York is a great city, we already know that… so if you haven’t visited yet, certainly get here sooner than later. I was at the top of the World Trade Center when I was younger, but I also visited in June of 2001. Happy I was able to see the view one last time, still remember standing up there being deathly afraid of heights and just being amazed at the entire city. As I get older I try to appreciate as much as I can, I don’t think many people in NY do that.